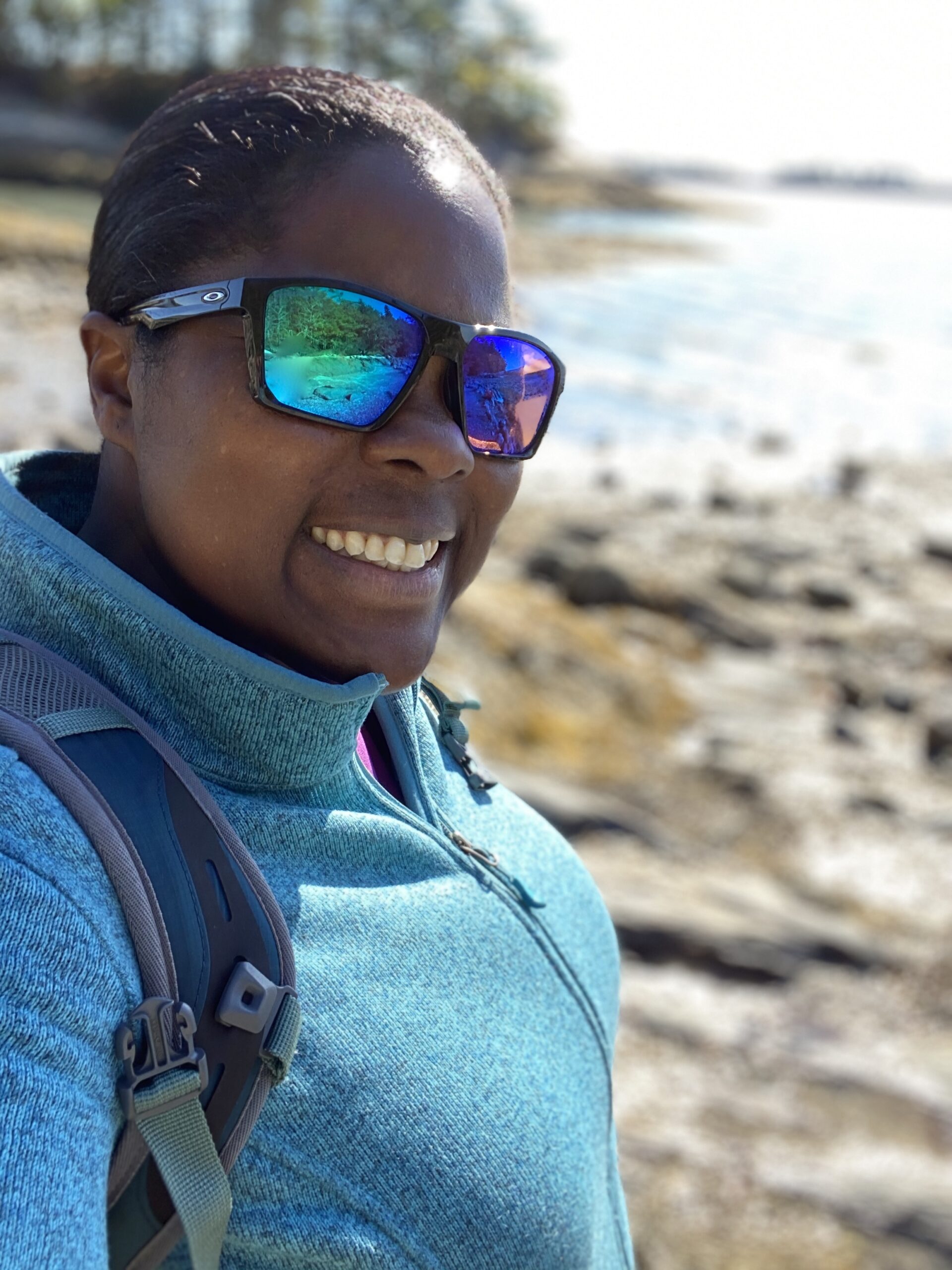 Imagine a vacation where you fill up your car (the adventure-mobile) with your bike (if you’re like me and don’t have a bike rack yet) with all the necessities for a grand adventure, drive a couple of hours south east, and submerge yourself in endless lobster and all things blueberry. Yep, you guessed it, it’s Maine. I was asked by Visit Maine to plan an itinerary filled with fun weekend adventures, food and of course, coffee, and you all helped me by voting on my Instagram Stories!

My previous travels to Maine were limited to Wells and Kennebunkport, and I was pretty satisfied with the offerings in those places. Beautiful New England beaches, fantastic culinary options, friendly people, trails, unique shops, and the sunrises. OH, the sunrises!

So when I got the opportunity with Visit Maine to get my butt to the DIRIGO state, which, by the way means, I DIRECT, I LEAD in Latin–a state after my own heart, I couldn’t hop in my adventure-mobile fast enough.

I spent the first night at the beautiful Kendall Tavern Inn. The owners, Marc and Nancy met me at the door and I immediately felt like a long lost and well-loved relative. We chatted, I had cookies, we laughed and joked–seriously like we were family. I travel a lot for work and I cannot tell you the number of times I’ve felt less than welcome in a place of lodging. This was different.

They helped me carry my bags up the stairs to my lovingly appointed, corner room, that had windows facing south west so there was lots of sun in the afternoon and also in the morning.

Oh, the morning! The next day I awoke to the smell of coffee. I took a long shower and headed downstairs to the breakfast room, where my place setting was. I’m an avid coffee drinker and so felt immediately at home when the brew started pouring. I told Marc I would be u

sing both mugs at the table and to please keep both of them full.

Linda came out shortly with two warm butterscotch scones. I was pretty satisfied with that—I would be going on a hike that morning so I needed some warm carbs in my belly. As I contemplated which trails I would go on, daintily sipping my two mugs of joe (or guzzling-t’s all subjective right?), Nancy came out with what I thought perhaps was the breakfast dessert? A dollop of creamy yogurt with an orange slice, berries and some kind of magic sauce or coulis or whatever fancy foodies call it.

“What is this?” I asked? “It this a liqueur? A special if-tell-you-I-have-to-kill-you kind of sauce?”

Marc was unsure. “Um, I think it’s orange juice and honey? Let me ask Nancy.” He headed back to the kitchen while I tried another spoonful to figure it out myself.

“Oh, there is something else.” My mind immediately went the direction of Cointreau, for some reason.

“It’s zest. Orange zest. That’s all” Nancy chimed in, following and in a gorgeous upright New England accent “Yeah, that’s ahl it is. Nothing too fancy but you get a laht of bang for yer buck.”

“Well it’s amazing and I love it.”

That particular combination, simple as it was, dazzled these taste buds-and it didn’t even need any Cointreau! Go figure! More coffee was poured.

I was almost ready to leave, but apparently there was another course? You see, I’m used to a quick continental breakfast (if at all!) and then I hop into the car for my first appointment. This time, I could relax a little, because my first appointment was a morning hike in Wolfe’s Neck Creek State Park. I could spend a few extra minutes enjoying breakfast. 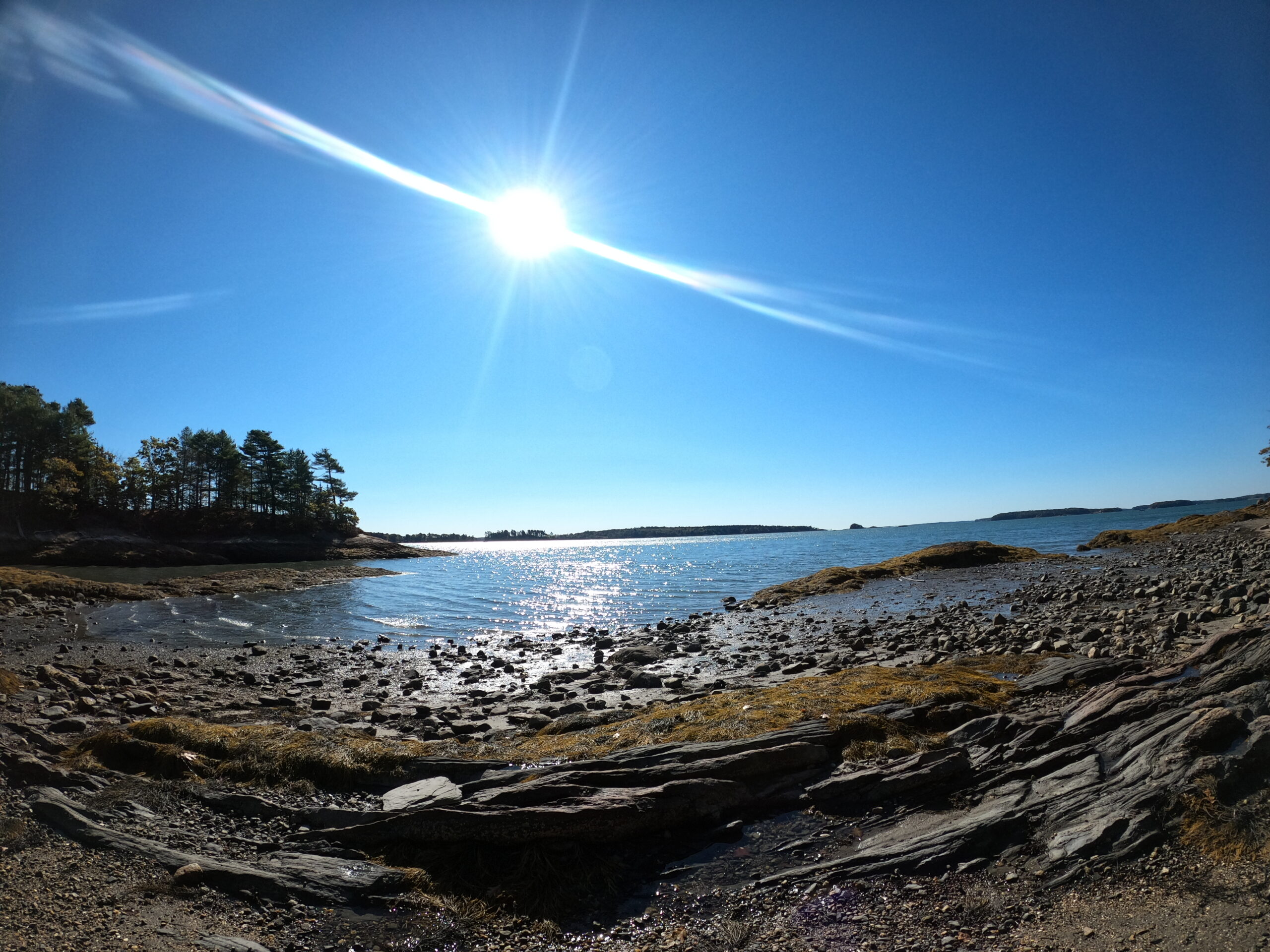 After this lovely, luxurious breakfast with many more stories and laughs about Marc’s days as a journalist, I bade my new friends farewell for the day. I had a long day of adventure awaiting! 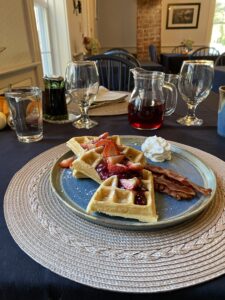 The first stop was the Wolfe’s Neck State Park on Casco Bay. East coast sunlight is such a gift to us! The water sparkled, the briny seawater perked up my nose. There was the laughter of children, digging for clams, the gentle ebb and flow of the water against the shoreline. I climbed atop the rocks that would be hidden beneath the water at high tide and breathed. I hiked a bit on the Casco River Trail that follows along the shoreline and allows for some fantastic viewpoints. It was here that I first thought “the air is so clean here.” I had felt a change–the air was crisp and cold, a little nippy in the morning, but warm and seemingly particulate-free in the afternoons.

I even took the opportunity to ride up and down the gravel entrance road to the park if only to delight in the spectacular fall colors!

My next stop was Thompson’s Orchard. I went in search of my yearly apple-picking experience and that it what I got! There were plenty of big, beautiful, richly colored apples left, Macouns, Macintosh and others. I never make it in time to pick Honeycrisps, but that was rectified by the huge and heavy apple pie I bought (along with too much maple syrup, blueberry jam, pepper jam, maple candies.) It was hopping here, but there was enough open space for everyone to pick many apples. I loved to see all the families, singles, and couples of all ages engaging in this pretty sacred fall activity. 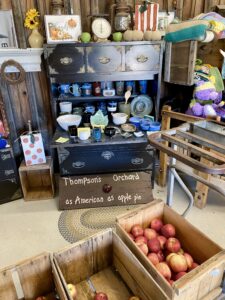 After working in the sun for a about an hour (it had started to get warm at this point), wrangling the apples down with my apple-picking stick that I likened to a lacrosse stick, I stopped in the store to pay and impulsively pick up all the treats listed above, and headed to lunch. Upon leaving Thompson’s I realized I had made a grave mistake–I’d forgotten to pick up one of their apple cider donuts–they even had pumpkin spice one!  But since I was running a little late and headed for lunch, I took the L. That regret is still imprinted in my mind.

Lunch. Let’s talk about lunch! As a born and bred New Yorker, I’m very leery of all restaurants outside of my birth city. (It’s true, ask any of my friends.) However, the minute I peeped the local cider list from the Royal River Grill House the evening before, I was sold. 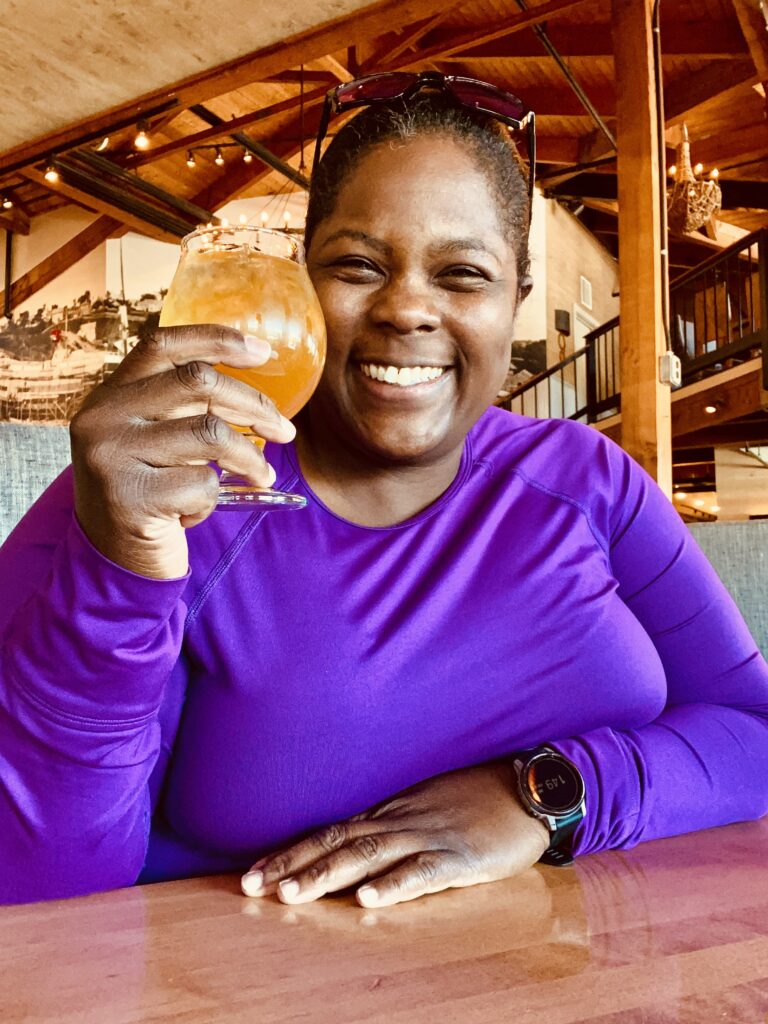 After I was seated, I ordered the Maple Bourbon Cider with a Ginger Liquor infusion. I decided then and there to move in–as in, move into the restaurant. I was pretty impressed with the menu but didn’t have a hard time deciding what I wanted. I was determined to get in, at the very least, two perfect lobster rolls during this trip which I was able to achieve, easily at the Royal River Grill House. I also achieved the delightful surprise of Maine Crab Cakes with Remoulade and Peperonata. I couldn’t leave this beautiful space that looks out onto the Royal River in Yarmouth (pronounced Yahmith”, boats docked here and there rocking to and fro on the water, without at least trying some dessert (even though I was very full). 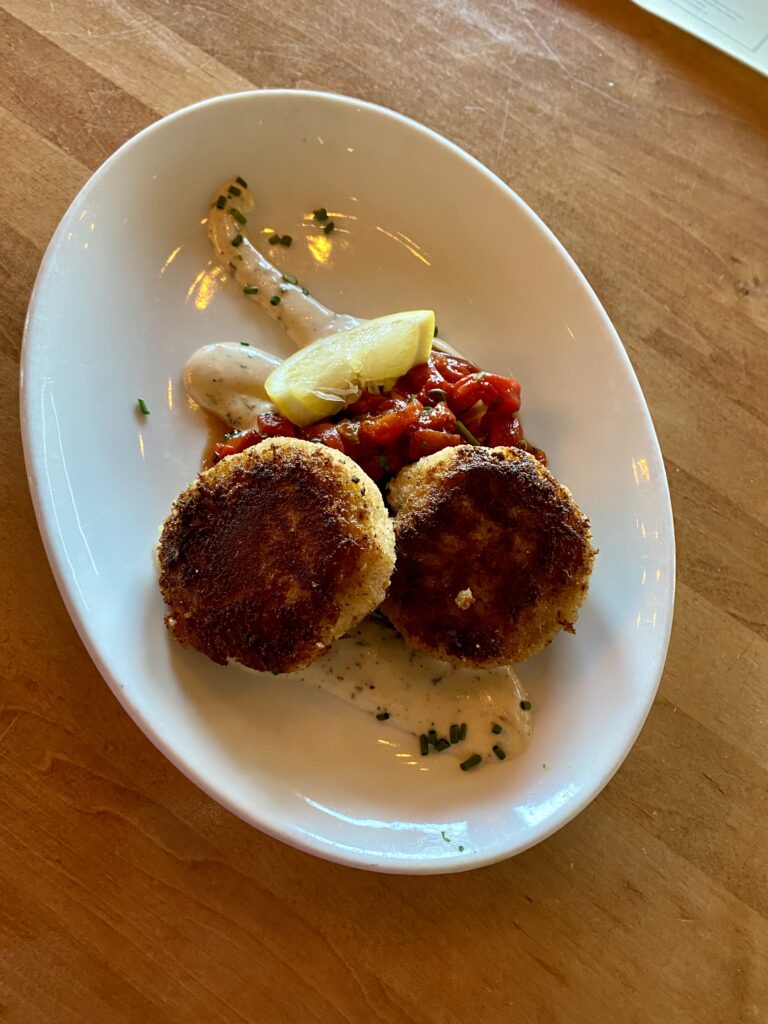 I had eavesdropped on the servers who enticed other diners with their descriptions. Had I heard Merlot Sorbet? That sounded about my speed! I ordered it and it came with a delicious cookie that was just the right side of sweet to counter the fullness (yet lightness?) of the sorbet. Another coffee was in order. This time, a double espresso!

I headed back to Freeport to explore, and bought out the entirety of the L.L.Bean Home Store, picked up some Whoopie Pies from Wicked Whoopies-apparently there is a whole entire polemic about which state made them first? I’m going to go with Maine.

Dinner was-yep, we’re back at the food-at Buck’s Naked BBQ. No one was naked, and everyone was appropriately social distanced. Not once did I worry about eating indoors. Every single restaurant adhered strictly to state mandates. And Bucks was no different. I imagine that, in “the before times” it would be bustling and crowded, plates of ribs and brisket with coleslaw and sweet cornbread being passed around to big and small parties alike. I also imagine that the food was as good as it was the night I was there. There were succulent dry-rubbed ribs served with an array of sauces, a spicy North Carolina style, a blueberry sauce, a robust house sauce, and a honey mustard sauce. I enjoyed each equally although I loved the blueberry barbecue more equally! The half rack of ribs is enough for two people who have been traveling and eating all day, so I was only able to eat a few. To drink I enjoyed a local cider, the Urban Farm Fermentory Blueberry Cidah (that means, CIDER) It was refreshing and full of apple and blueberry flavor. A fitting end to a long, sunny day of adventuring. 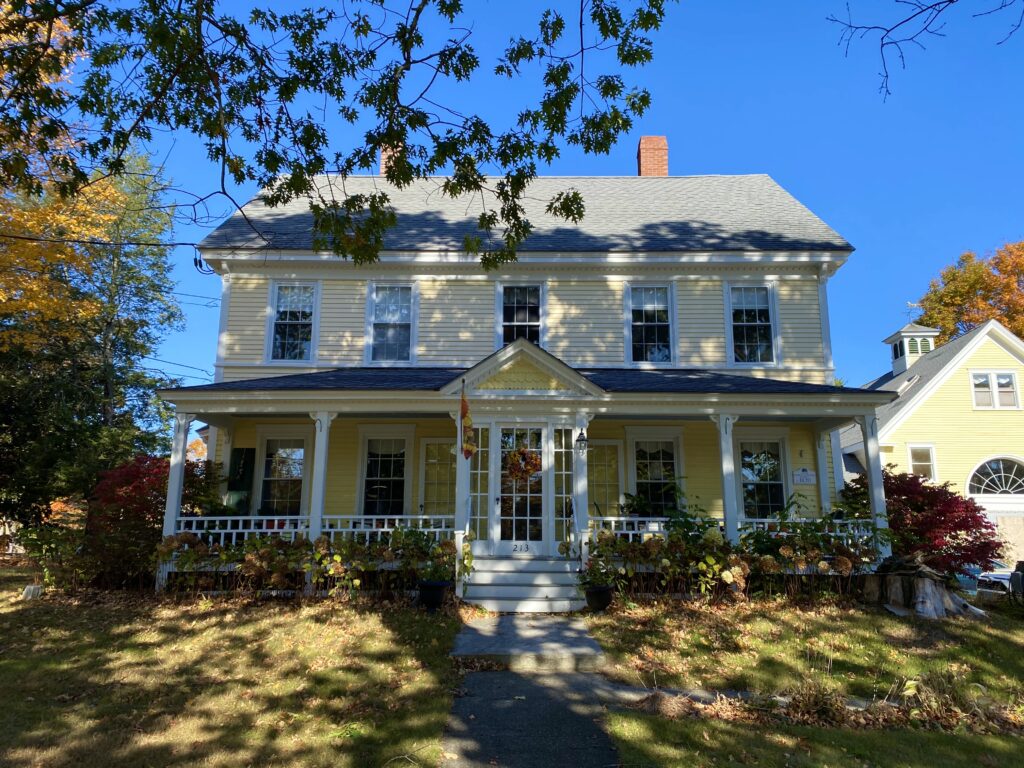 I headed back to my what I shall now be referring to as my second home, the Kendall Tavern Inn. There were chocolate chip cookies waiting out for me in the sitting room. I was sad that I wouldn’t be able to have a sumptuous breakfast and cheerful, thoughtful conversation with Nancy and Marc there again. I had to get to bed early for an alpine start the next morning.