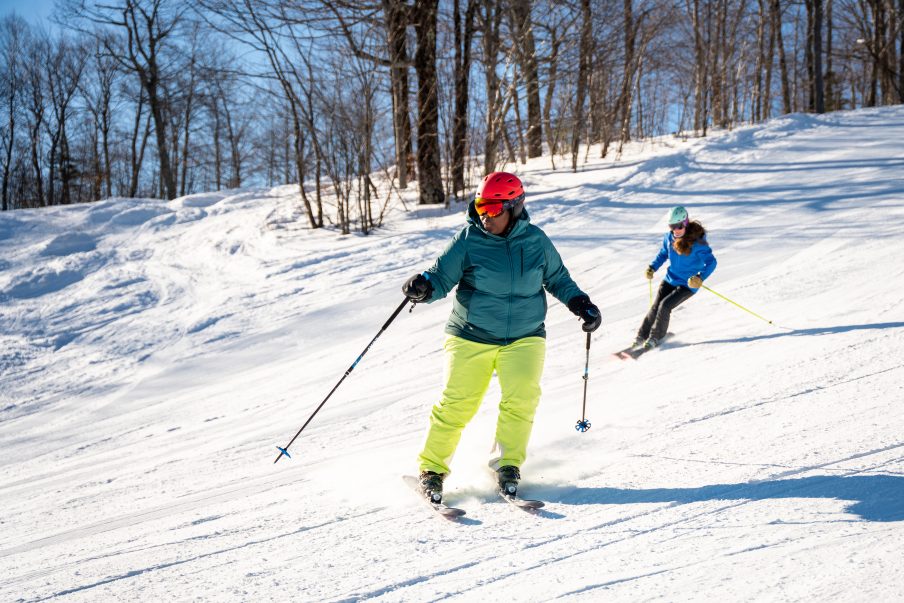 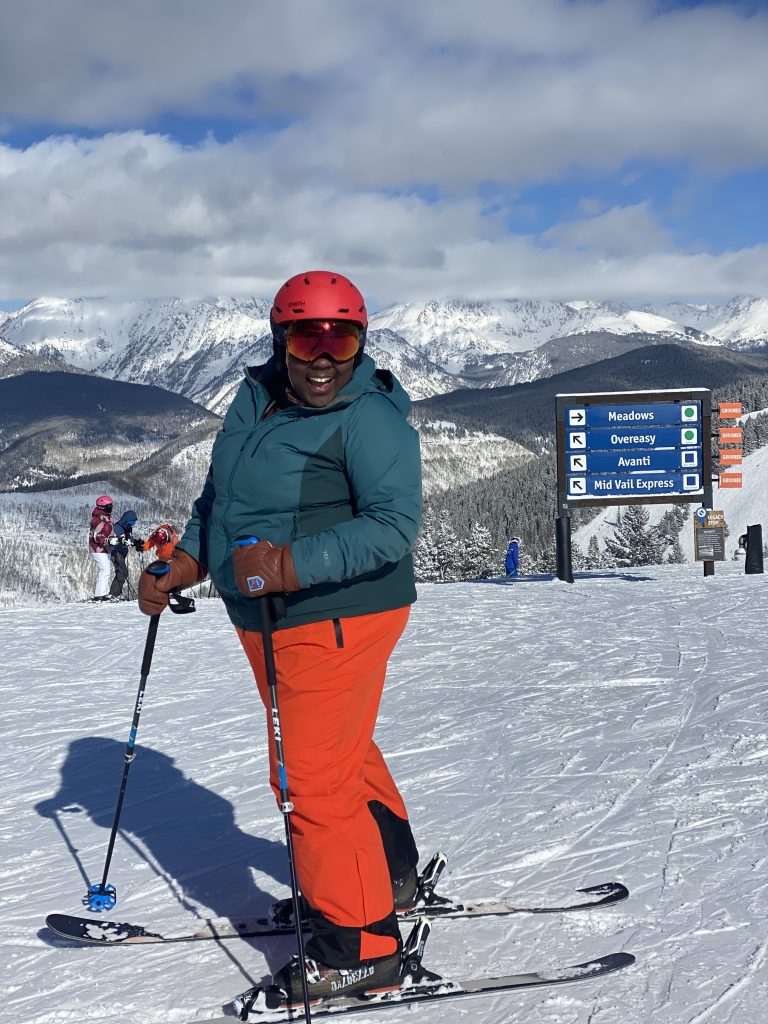 A little over twelve years ago, I donned my first rental skis and boots on a snowy Saturday at Mountaincreek, in Vernon, New Jersey. I was so excited! I would be taking a day-long adults-only group lesson while my seven-year-old son did the same (in his own age group, of course!).

It was glorious. I learned how to snow-plow and do a little parallel. My son learned the same thing, only he called these skills pizza and french-fries, which, incidentally, he also ate for lunch. It was a whole thing.

We both had so much fun and planned to come back for the second and third days of our lesson-lift-tickets combo, to practice more and more, on the bunny slope. I ended up going by myself since our spring breaks didn’t line up (I was a teacher at the time). I put on a thick sweater, my warmest winter coat–a very long one (yeah, I know now!), two pairs of leggings, and sprayed on a lot of hope and excitement.

My plan was to do exactly what I had learned in that lesson: practice snow plow turns and try to get a little speed while parallel on the bunny slope. I was HYPE!

I arrived at the resort to learn that the bunny slope was closed (it was a pure block of ice, lo and behold). But, a kind liftie (I didn’t know what they were called at the time) said “You know what? That lift over there will take you up to a green! Take a right when you get off. It’s like, basically the same as a bunny slope. You got this!”

And with this, and my nonsensical intrepid self, I got on the lift, somehow managed to get off without falling, and hung a right, like I had been told to.

I hung a right alright.

The trail was narrow, curvy, and in my beginner’s perspective, very steep.

Long story short, I lost control and found myself being transported back up the mountain (did I really slide that far down?) in a snowmobile with ski-patrol. I was informed that my day was probably over, and I agreed. Riding down the chairlift was a little embarrassing, but there were no broken bones or torn ligaments, so all in all, it was still a good day. I was a little sore, but proud of myself for going out alone and trying my best.

In 2019, I put on a pair of demos at Breckenridge–did I know what demos were? No. But I made my way up to the bunny slopes at the end of a very long day of driving, and slid and slid and fell and fell. In front of a lot of children and other adults. This time, though, the snowplow and French fries worked a few times, and I was game to try it all over again.

I was lucky enough to get a ski-ambassadorship at the end of 2020 with Coalition Snow, a delightfully disruptive, woman-owned ski company, and took lessons at my local mountain, Bolton Valley Resort. (I am a person who now says things like “my local mountain” and “do you wanna do a few laps in the morning” and “the apres scene here is bumping”. Who knew? LIKE, SERIOUSLY???

I started from the beginning again, and was patient with myself. I had just healed from knee surgery and to my surprise (to everyone except skiers ––IYKYK, the skiing helped me get back to running!) My quads were on FIYAH and so were my calves and hamstrings too! I graduated from the bunny slope to the lift, where of course I face planted many times. Eventually, I learned to um, bend my knees.

It was after doing a couple of runs timidly on my own, right off the lift, that something clicked. It clicked HARD.

Oh, I got hooked really hard after that first time doing five runs on my own. I remember being distraught at the purported end of the winter season in 2021, until I looked west. OH, there’s still snow? I’m there!

Fast forward to the end of 2021, when I partnered up with Vail Resorts to experience and highlight some of their East Coast Beast Coast Resorts. I thought to myself- “oh, this is going to be the best winter of my life.” And it was. Winter isn’t even over yet!

I started out at Hunter Mountain in my birth state, the Big Apple state of New York. Hunter Mountain is in the Catskills, a two-hour drive from New York City.  It was early in the season, with man-made snow, but I cared not! I would ski anything that had snow on it! (I don’t even know who I am anymore….) So, I did. I also brought along my friend Latoya Snell, who goes by the moniker Running Fat Chef, to take her very first lesson on skis.

What an experience! I got to be the supportive friend–who also took tons of photos and videos. George, the hero instructor for the day, was gentle, encouraging, and supportive of Latoya as she learned to glide down the slope (albeit with a few falls–but this is part of learning, no?). She had an excellent day, and so did I! After her lesson and lunch at the lodge, it was my turn to ski. One run became two, which became many because I couldn’t get enough! 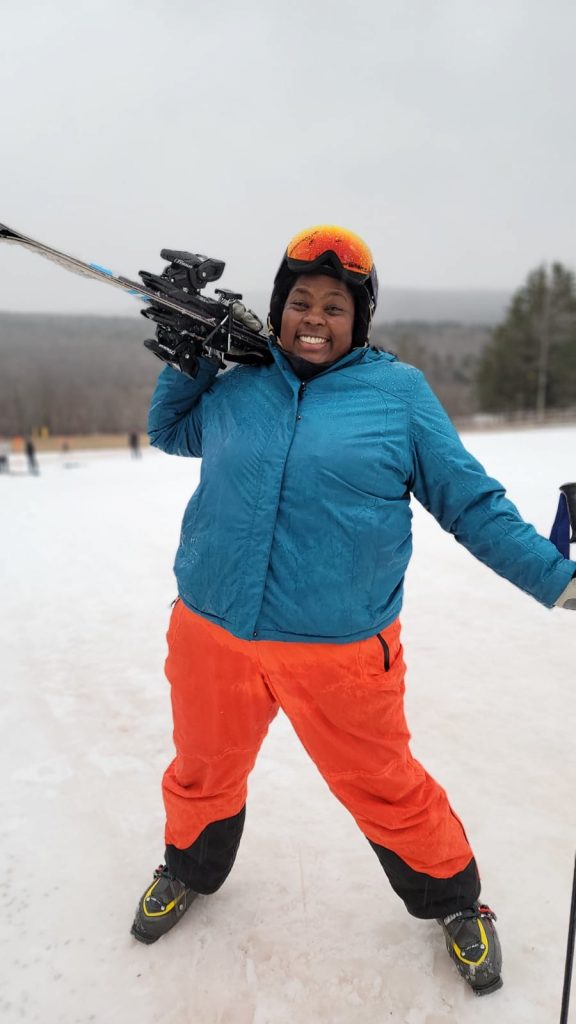 We had an incredible (and dare I say lavish!) meal at a wonderful local place in town, Jessie’s Harvest House, and that night we were both tired in that oh-so-good-and-sore way. Our stay at the beautiful and warm Kaaterskill Inn was comfortable and friendly. I’m excited to bring my Brooklyn family here to learn to ski! Stay tuned!

My next stop was right after our first big snow here in Vermont. I arrived at Okemo Mountain (in the middle of the night) and immediately went to sleep in my warm room (I’m obsessed with toasty rooms) and a minute later (it seemed) got up to go meet my chariot downstairs at o-dark-thirty, because that is when the trails are being groomed! That’s right, I got to ride in the snowcat with the legend, John Boudro!

He took me all over the mountain showing me how the grooming was done, what differing snow conditions required, how the snowcat actually worked (this one was a new purchase and very high-tech with touch screens and everything!). We went up a steep black, very easily, and down a different one (a little hair-raising for me but I live to tell the tale!), and went back up to the top of the mountain to watch the sunrise. It was spectacular and stunning.

“This is part of why I do this. To be here at the top of the mountain to see this.”

And that, folks, is why we do things outside–To experience and share in the marvels of nature.

Later that day, after a nap and breakfast at the Roundtop, I caught up to my friend Aja, a Vermont State Recordholder in Deadlift and Squat, having her first ever ski lesson! She was a champ, gliding down the slope with Mark, her most excellent and patient instructor, already using the chairlift! (It took me two months to get back on a chairlift after that incident with the ski patrol guy….) This is my goal in life now, BRING EVERYBODY SKIING!!!! It will change the world!

Aja’s husband, a very talented snowboarder, and I went to scout out some trails! We ended up doing the same route every time because it felt different each time. The first run down from Jackson Gore Peak took some getting used to, with its multiple pitches, turns, and angles. The second and third were easier as we became familiar with the mountain’s idiosyncrasies. This run was longer than I was used to, but was exhilarating nonetheless!

We had dinner at the Coleman Brook Tavern–the appies were divine–we had smoked whitefish, and then our entrees, steak, the Wagyu burger, and the linguini were perfect for some fancy refueling after a long day of gliding and hockey-stopping!

The next day’s runs from Jackson Gore Peak were entirely different from the previous day’s! This time, we got out for almost-first chair, and slid down the mountain on fresh corduroy–it was faster and easier this time around! The sun was out, the mountains around us were showing off, and it was a spectacular day.

One of my favorite aspects of my visit to Mount Snow was that it really taught me that mountains are individuals. They have their own characters and behaviors, shapes and contours, their own attitudes. The invisible spirit of Mt. Snow said to me (in my head)– “You will work for your turns, many times over.” And oh boy, I did–Many. Times. Over.

This time, it was my turn to have a lesson.

I met up with Genevieve the first day in the afternoon, when the temperatures had risen from a cool 10 degrees to a balmy 15! She was joyful, energetic, funny, and precise in her instruction. I told her I wanted to work exclusively on pole planting, and that’s what we did, on a wide selection of trails that were longer and longer runs, that I referred to as “very athletic!” But I was game! She made the learning so fun, it was hard to feel tired. But trust, when we were done, I was DONE. I had improved my pole planting timing after observing and trying to imitate her graceful and perfect turns. I was neither graceful nor perfect, but I got it done! 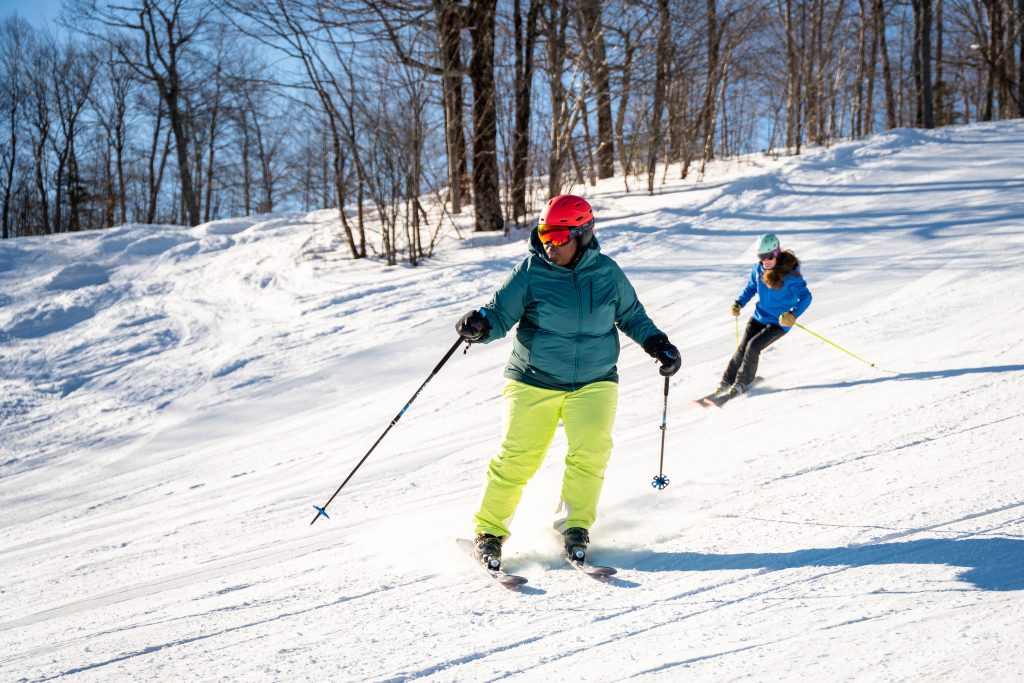 The next day we spent on the slopes working on another skill, and this time with photographer Evan Kay, of Climbing Higher Productions following along and capturing some excellent content.

It was colder this day, (can we say a high of 6 degrees??). We worked on keeping my torso front-facing. I was not graceful, and definitely not perfect as I tried to work this into pole plants. If you can laugh at yourself while learning, that’s a good thing!

Learning as an adult can be difficult and intimidating, especially when you’re sharing the slopes with four-year olds who are in their second or third season of skiing! That’s okay! I look at the little ones and try to mimic their lack of fear and trust in their bodies, and it’s alright. Sure, sometimes I fall, and depending on where (right under the chairlift perhaps?)It can be embarrassing. But the more and more you practice, the less you fear, the more you’re willing to take a chance on yourself, your mental and physical health, and the right you have to be outside and take in the bounty of nature. In the cold.